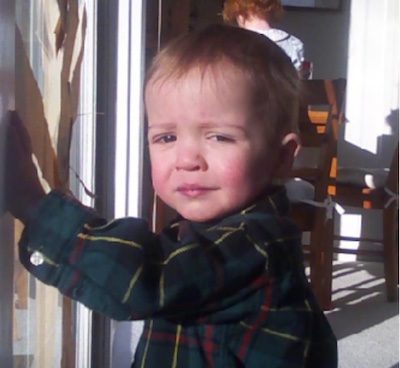 Our connection with The Joshua Harr Shane Foundation originates in the Philadelphia, PA/Camden, NJ area back in the fall of 2012. My wife, April, and I were temporarily displaced to the Ronald McDonald House in Camden, NJ from Mequon, Wisconsin for almost 6 months. Our son, Elijah, was diagnosed with CCAM, a tumor on his lung that grew so large that it engulfed his body. He had fetal surgery at 25 weeks gestation and put back in April’s womb until he was born prematurely at 33 weeks.

Elijah was born at the Children’s Hospital of Philadelphia. The following day he had his accidentally diaphragmatic hernia repaired; the next day he was put on ECMO (heart & lung bypass). Elijah remained on ECMO for nine days before his heart and one lung, which collapsed from the accidentally hernia, was capable of supporting himself. He would remain in the NICU for nearly seventy days. We traveled across the Benjamin Franklin Bridge every day to see our son in the NICU. This is where JHSF came into our life.

JHSF heard my wife and sons’ story and wanted to help in any way possible. JHSF donated to our travels back and forth to Philadelphia and Camden via the EZPass. The bridge wasn’t free. It cost $5 each time we crossed over to Philadelphia. There were days we crossed the bridge multiple times.JHSF made it possible.

The doctors performed another surgery called a Fundoplication which wraps the stomach around the esophagus. They said Elijah had chronic reflux and didn’t want him to aspirate into his only lung. Elijah’s stomach was already small from being premature and the hernia repair; now it was even smaller from the Fundoplication…so they also put in a feeding tube in his stomach called a G-tube. At the end of January 2013, it was finally time for us to go home. JHSF showed compassion for us again. They donated $500 to our drive home. (This covered the entire trip: our gas, hotel and food). Home was a place we hadn’t seen for nearly six months. We were also so excited to see our 2.5 year old daughter who came and left throughout our journey. What a blessing JHSF is for helping us get home!

Within months that we were home, we realized the difficulty of getting a G-tube baby off the feeding tube; a long and winding road. Through months of research and global contacts, April found a tube weaning therapy based on hunger versus behavior. Elijah had been undergoing therapy in a behavioral based program that wouldn’t discuss a hunger reduction wean until his was at least 2 years old. This seemed to be way drawn out and the local therapy was not showing results in getting Elijah off the tube.

The hunger based program was more in line with our thinking, so we proceeded to pursue it. The major detail of this hunger based therapy… it is considered experimental and home based so insurance doesn’t cover it. The out of pocket charge was going to be $12,000 for therapy, plus renting a home

With the Joshua Harr Shane Foundation generosity we no longer stressed about if we could afford to see our precious son each day. The Our non profit organization made it possible.

We also had to travel once again out east (gas, hotel and food). This posed a challenge for us again; we would have to pay 50% upfront and the remainder shortly after completion. We didn’t know what to do for a few weeks. How would we pay for this?

Medical bills were already at the maximum. April came in contact with Judy and we filled her in on where Elijah was in his journey. JHSF immediately wanted to help as the foundation could relate to Elijah’s feeding aversion.

A few days later, Judy contacted us while she was on vacation; she called to tell us that The Joshua Harr Shane Foundation was donating $5,000 towards Elijah’s hunger based program.

God bless her and her foundation!

And the simple act of calling while on vacation truly showed her tender heart and passionate desire to help families in need.

Our son completed the tube weaning therapy program and has not been fed via tube since Thanksgiving 2013. Elijah still has some hurdles to overcome, but that’s fine with us. The great thing is he is tube free!
Elijah’s story is filled with many obstacles but also many miracles from God and generosity from people especially Judy Shane and her Foundation. Our journey was very hard at times but with the assistance of the Joshua Harr Shane Foundation we were able to overcome many financial burdens that would have otherwise made it so much harder than it was already was. Judy has changed our lives in so many ways. The Joshua Harr Shane Foundation is the “real deal” with its kindness, generosity, caring staff and donations that truly brighten someone’s day. We are honored to be a part of the Joshua Harr Shane Foundation family and strive to be stewards like them.

Our family will be forever grateful.