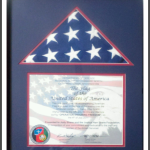 This certificate states the following:

The Flag of the United States of America

This is to certify the accompanying American Flag was flown in the face of the enemy over the American compound Camp Mike Spann Afghanistan by the officers, NCO’s and Warriors during “OPERATION ENDURING FREEDOM” on the 4th of July, 2011?

Mike Spann was the first American killed in the Afghan War